Atholton’s biology and earth science students gathered data about our watershed and shared it at a county-wide summit.

On Wednesday, April 25, Atholton’s biology and earth science students travelled to The Howard County Conservancy’s Mt. Pleasant location to share their data with students from other Howard County schools, experts, and elected officials.

The summit was the cumulation of a Howard County year-long research project for all biology and earth science students. With the help of

their watershed coaches and science teachers, students collected data from local streams and their schoolyard.

“I think it’s really exciting that students get to do real science that really makes a difference in people’s lives. It really demonstrates […] how important science is. It’s not just something that you learn in school; it’s something that can really make a difference in people’s lives,” said Howard County Secondary Science Coordinator Mary Weller. “The work that they do, the reporting out, and the action projects that
students do, makes a difference right here and now, and that’s really important for all of us.”

This year was the first year that all 9th grade students took part in the program, according to Jessica Mulhern, Secondary Science Educator. Students collected data from schoolyards, and each school was rated on a scale of 0-16,with the best scores being the lowest number. Atholton’s schoolyard got a worse score this year than last year, 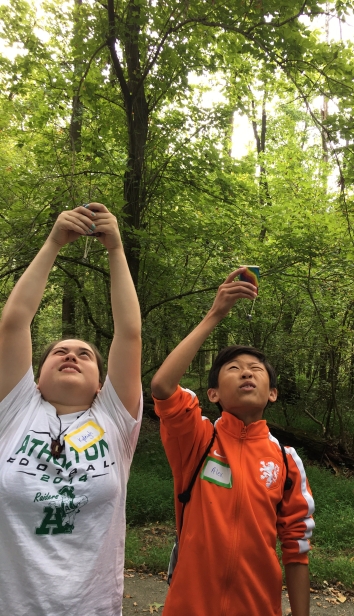 currently ranking at 9th in the county. The student-recommended actions included creating a rain garden and a no-mow meadow. Both of those would work to help the watershed by allowing more water to be absorbed into the ground through pervious surfaces, instead of being washed into the watershed taking debris and pollutants with it.

Students also collected data from local streams, including by “discovering new macroinvertebrates and how they interact with their ecosystem and how they help us,” said Angel Johnson, a sophomore and one of the Atholton speakers at the summit. Counting macroinvertebrates can be one benchmark of a stream’s health, because some are sensitive to nutrient or pollutant levels. Other things that were measured include nutrient levels, erosion, and nitrogen and phosphate values. 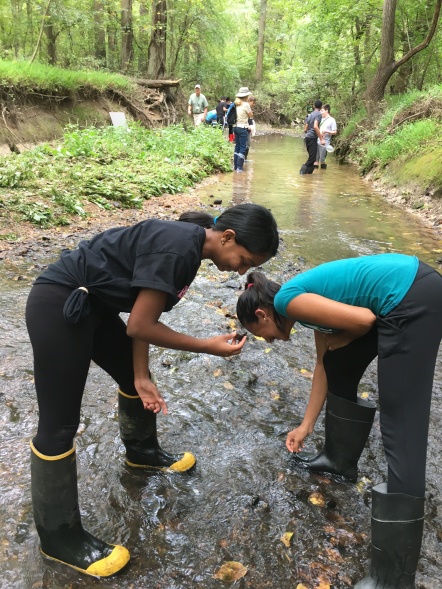 Students turn over rocks to look for macroinvertebrates.

States, supporting the majority of fish catch, along with more than 2,700 types of plants and more than 250 animals. Some of the threats that the Bay is facing include too many nutrients, pollutants, and climate change, and to combat these things, scientists need data, according to the Chesapeake Bay Program.

“You’re doing a lot of good work for the [Patuxent] River, the folks who actually make
decisions about the river, to have upstream data, that we really don’t have much of. We
have a lot of downstream [data], where the River gets big,but we don’t have a lot up here,” said Howard County Councilmember and Maryland Patuxent River Commissioner Mary Kay Sigaty, adding “the work that students are doing can be directed to folks at the state level who are making real decisions about the river.”

Sara Weglein, a biologist at the Maryland Department of Natural Resources, said that her department uses this kind of data “asa guide to know some of the best areas, the worst areas, [and] the areas that need a little more attention.”

However, according to Ed Nawrocki, the watershed coach for Oakland Mills High School, the importance of the watershed project goes beyond data. He said he hopes that after the program students “are more aware of their environment, they understand how they affect it, [and they] realize that there are things that have to be done to make it better.”

Atholton Sophomore Angel Johnson, one of the speakers at the summit, holds a hellgrammite.

This focus on learning was reinforced by Dr. Martirano, the new Howard County Superintendent, who said in his speech at the summit that his “goal as Superintendent is to equip [students] with the ability to be critical thinkers,” and that this program is helping to achieve that goal. Meg Boyd, the Executive Director of the Howard County Conservancy, said in her speech that she hopes students continue to use their “outdoor voice” to advocate for the environment.

“I thought I was really making a difference actually going out there and seeing how they
find the information. Before it was just on a piece of paper, and now you actually see
what’s going on in the stream,” said freshman Mia Lazzari.

In the words of freshman Nehal Naqvi, “We should care about what happens to the watershed because we have a growing population. If we don’t care about our natural resources now, how are the future generations going to use them in the future?”

Chloe is a Senior and Editor-In-Chief of the Raider Review. She enjoys dancing, petting her dog, and interviewing people for her articles. In her free time, she likes to eat Chipotle and make layouts for the paper.